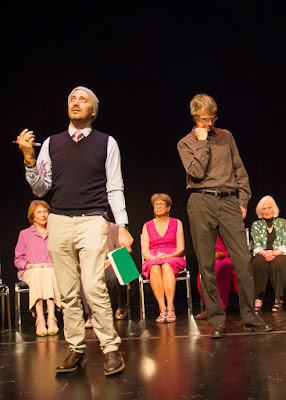 Somewhat related to our upcoming performance of climate theater and sustainable jazz this coming Saturday afternoon (6/18, hosted by Labyrinth Bookstore on Nassau Street in Princeton, 3-5pm), is a feature article in the latest Princeton Magazine about McCarter Theater's Onstage group. All three of us performing Climate Cabaret this Saturday have received much of our training through the Onstage community theater experience. We collect true stories from the community, which are then turned into monologues and scenes that we then perform. The article tells the story of the fifteen member Onstage Seniors, most of whom have "come to acting late in life", which is to say, not too late in life to benefit from all the pleasure and insight that theater and acting can afford.

I came to Onstage, and to acting, four years ago. My background in science and jazz had taken me a long way, but had not required looking people in an audience in the eye while I spoke. While leading nature walks, I would tend to look at the plants rather than the people I was talking to. Our Onstage director at the time, McCarter's assistant artistic director Adam Immerwahr (photo), was having trouble getting me to look up when I delivered my monologue. Being a creative sort, he finally had fellow troupe members lie on the floor around me as I stood in the rehearsal room, so that I would be more likely to look them in the eye. His brilliant mix of humor, inventiveness and wisdom has been transformative for all of us.

Onstage Seniors is now directed by Liz Green, and we're performing this year's show at senior centers, prisons, and other area venues that are often underserved. For anyone interested, we will perform tonight at the Arts Council of Princeton. There is no charge for our performances.

Email ThisBlogThis!Share to TwitterShare to FacebookShare to Pinterest
Labels: Press