It was a rare moment in theater when our Climate Cabaret actors demonstrated in slow motion the highly combustible and fateful moment when carbon dioxide is created out of carbon and oxygen. Our two oxygens (the 2 "O"s on the left) were teamed up in that familiar O2 combination that floats around keeping us alive, but carbon (the guy with the "C") was showing some volatility in that chain of fossil carbons he'd been stuck in for what seems like millions of years. When he got close to the pair of oxygens, all it took was a spark and, well, 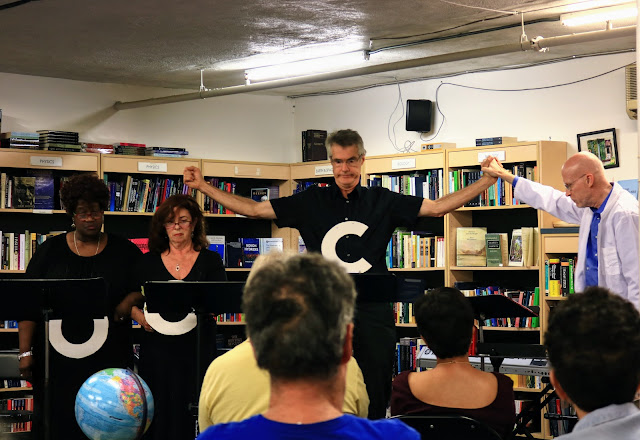 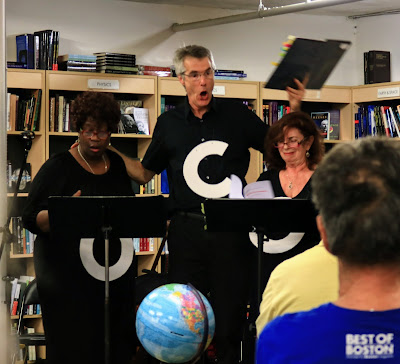 you know how it goes. Their combustion right then and there was a totally understandable reaction. The carbon combined with the two oxygens to form carbon dioxide, which they all agreed was a total gas. Liberated from his carbon chains, his energy released to drive a piston or heat a home, carbon floated up and away with the two oxygens, ready to bask in the sunlight while they cook the planet. 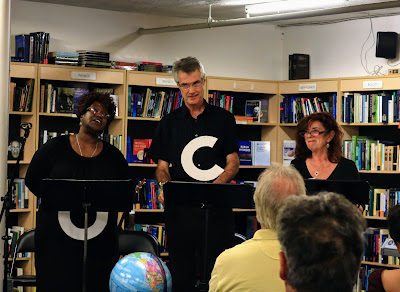 Theirs was a happy molecule, feeling very stable in that O=C=O configuration. The stability of the world, however, was less assured, and future life on the planet could not be reached for comment.

Next performance, Friday, July 21, at the 1867 Sanctuary Arts and Culture Center, 101 Scotch Rd in Ewing. The show in this beautifully restored chapel starts at 8pm. Here's a map.

Posted by Steve Hiltner at 4:48 PM

Email ThisBlogThis!Share to TwitterShare to FacebookShare to Pinterest
Labels: Events